Jagadguru Sri Adi Shankara Bhagavatpada established the first of the four Amnaya Peethams1 at Sringeri more than twelve centuries ago to foster the sacred tradition of Sanatana Dharma.
Hallowed for all times by Sage Rishyashringa who stayed and performed Tapas here, Sringeri attracted the great Acharya with a remarkable sight. 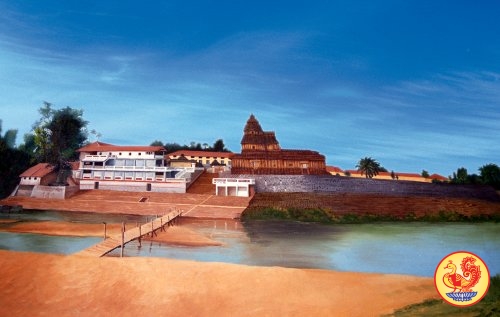 A contemporary painting of Sringeri
Tradition has it that after the Acharya had dispersed all the non-Vedic creeds prevailing in the country, He was on the look-out for a convenient and holy place where he could establish an institution to spread the truths of Advaita Vedanta. When the Acharya came to Sringeri, he saw an unusual sight on the banks of the Tunga. A cobra was seen spreading out its hood over a frog in labour pains, to give it shadow from the scorching mid-day sun. Struck with the sanctity of the place, which could infuse love between natural adversaries, the Acharya chose this very location to establish His first Math.

Sri Kappe Shankara - A Shrine on the banks of the Holy Tunga river in memory to the
glorious sight witnessed by Sri Adi Shankaracharya; A serpent giving shade  from the
scorching sun to a pregnant frog in labour pains
The Madhaviya Shankara Digvijayam describes that the Acharya came across many virtuous people at Sringeri and taught them the doctrine of Advaita. He then invoked the Divinity of Knowledge, Goddess Sharada and consecrated an icon of the Goddess. Thus the Peetham He founded at Sringeri in South India for fostering the Vedas and the sacred tradition of Sanatana Dharma came to be known as the Dakshinamnaya Sri Sharada Peetham.
The Acharya appointed his prime disciple, Sri Sureshwaracharya as the first Acharya of the Peetham. Since then, the Peetham has been blessed with an unbroken Guru Parampara, a garland of spiritual masters and Jivanmuktas representing Sri Adi Shankaracharya. The succeeding Acharyas have led a life of such austere penance that it has led disciples to adore in them the radiance of Sri Adi Shankara Himself.
Besides being a centre of spiritual power, Sringeri also came to be known as a great place of traditional learning owing to the presence of Goddess Sharada and the erudition of the Acharyas of the Peetham. The Acharyas were instrumental in bringing forth commentaries on the Vedas and in further expounding the Bhashyas of Sri Adi Shankaracharya. The Acharyas also wrote a number of independent works related to Advaita besides producing a number of hymns underlining their ardent devotion to the non-dual Supreme worshipped in multifarious forms. The Peetham thus came to be regarded as the Vyakhyana Simhasana, The Throne of Transcendental Wisdom. Consequently, the Birudavali hails the Acharya as the occupier of this throne. Many regard Goddess Sharada Herself to be moving in the form of the presiding Acharya of the Peetham.
In the 14th century, royal patronage to the Peetham began with the founding of the famous Vijayanagar empire under the divine guidance of the 12th Acharya, Jagadguru Sri Vidyaranya. The austerity of the Acharya influenced the rulers to such an extent that they began ruling in the name of the Acharya and granted the Peetham the rights over secular administration of the land. At the rulers’ request, the Acharya began conducting a Durbar during the Navaratri festival - an occasion deemed by the rulers to honour their Guru. Subsequently, the Acharya came to be known as the Karnataka Simhasana Prathisthapanacharya and the Peetham became a mighty institution - a Samsthanam and is known to this day as the Jagadguru Shankaracharya Mahasamsthanam, Dakshinamnaya Sri Sharada Peetham at Sringeri. Over the succeeding centuries, a number of empires and rulers including the Mysore Maharajahs Hyder Ali and Tipu Sultan, the Nizam of Hyderabad, the Peshwas and the Keladi rulers and Travancore Rajas were drawn towards the Peetham and respected the Acharya as their Guru. 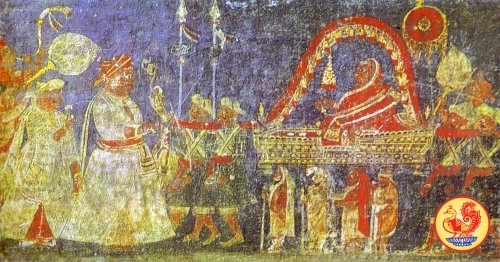 Sri Vidyaranya Mahaswami being accorded royal honour in the Adda-Pallaki by the
Vijayanagara Emperors,  Harihara and Bukkaraya. A 17th century painting based on the
mural at Virupaksha temple at Hampi. This tradition has continued
since then and is followed even today.
In the recent past, the Sharada Peetham has shone through the lives of the Acharyas - Jagadguru Sri Sacchidananda Shivabhinava Nrisimha Bharati Mahaswamigal, the re-discoverer of Sri Adi Shankara’s birthplace at Kalady and the founder of the famous Pathashala at Sringeri; followed by the renowned Jivanmukta, Jagadguru Sri Chandrasekhara Bharati Mahaswamigal; succeeded by the crest jewel of Yogis, Jagadguru Sri Abhinava Vidyatirtha Mahaswamigal. They have all left indelible impressions in the hearts of the disciples.
With such a rich history associated with Sri Adi Shankaracharya’s first and foremost Peetham, many wonder at the aptness of the Acharya’s choice of locating the Peetham at Sringeri, a spot replete with a hoary past, and bountiful with natural splendour and serenity.
Today, the Sringeri Sharada Peetham bedecked with an unbroken chain of Acharyas continues to uphold the principles of Sanatana Dharma with the 36th Acharya Jagadguru Shankaracharya Sri Sri Bharati Tirtha Mahaswamiji acting as a treasure of spiritual wisdom and peace for all seekers. 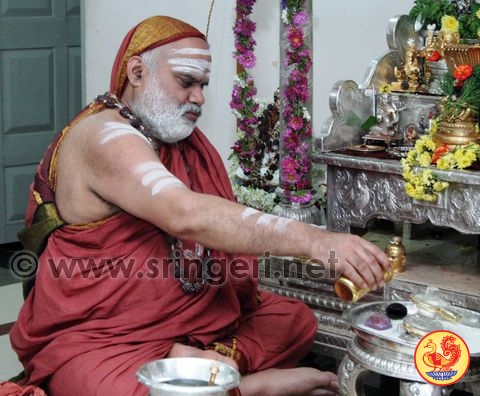 1. Amnaya Peetham
Amnaya–The Veda; Peetham–Throne. Lit. throne of the Veda. Seat of learning established for the preservation and propogation of the Veda. Jagadguru Shankaracharya established four centres in the four corners of the country for the safeguard and propogation of the four Vedas and appointed each of his prime ascetic disciples as the heads of each centre respectively.
2. Sanatana Dharma
Hoary / Universal Dharma. Lit. Universal law that is binding on all creation since time immemorial.

Posted by Unknown at 9:51 AM No comments: Links to this post