A New and Comprehensive Gazetteer By George Newenham Wright - 1835 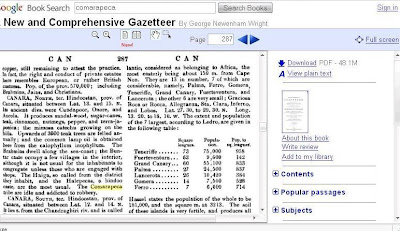 "The Comarapeca tribe are idle and addicted to robbery." 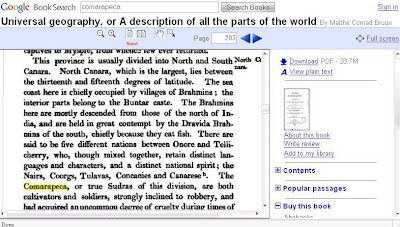 "The Comarapeca, or true Sudras of this division, are both cultivators and soldiers, strongly inclined to robbery, and had acquired an uncommon degree of cruelty during times of anarchy."

A Journey from Madras through the Countries of Mysore, Canara, and Malabar... By Francis Hamilton Buchanan 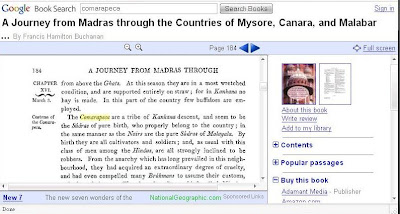 The Comarapeca are a tribe of the Kankana descent, and seem to be Sudras of pure birth, who properly belong to the country; in the same manner as the Nairs are the pure Sudras of Malayala. By birth they are all cultivators and soldiers ; and, as usual with this class of men among the Hindus, are all strongly inclined to be robbers. From the anarchy which has long prevailed in this neighbourhood, they had acquired an extraordinary degree of cruelty, and had even compelled many Brahmins to assume their customs, and adopt their cast. They have hereditary chiefs called Nayakas, who, as usual, with the assistance of a council, can expel from the cast, and settle disputes among their inferiors. A man’s own children are his heirs. They can read poetical legends, and are permitted to eat meat and drink spirituous liquors. Their women are not marriageable after the age of puberty. Widows ought to burn themselves with the bodies of their husbands, but this barbarity is no longer in use. Widows, and women who have been divorced for adultery with a Brahman or Comarapeca, may be taken into a kind of left-hand marriage ; but their children will be despised, and no person of pure descent will marry them. A woman cannot be divorced for any other cause than adultery ; if the crime has been committed with any man but a Brahman, Comarapeca, she loses cast. The men many take as many wives as they please. The Sringagiri Swamalu is their Guru. He receives their Dharma, and bestows on them Upadesa, holy-water, consecrated ashes, and the like. The Panchanga, or astrologer of the village, is their Purohita, and reads prayers (Mantrams) at marriages, Namacurna (the giving a child its name), Tithi, Amavasya, &c. &c. They worship the great gods, Siva and Vishnu, in temples where Kankana Brahmans are Pujaris. They offer bloody sacrifices ; and at the temples of Saktis, or"

Though I don't agree with the views expressed by the Authors.
It seems that they had a very bad image of our people/ancestors.
They have portrayed Komarpanths as rebellious, anti-social, idle, cruel, robbers, anarchists, etc.

However its a fact that Komarpanths were the aboriginal people of North Canara, and were originally soldiers and Agriculturists. Sri Sri Shringeri Jagadguru was their Guru since time immemorial, and they adhered to customs and traditions of the Hindu religion, revered Brahmin and Goud Saraswat priests. That being so, its difficult to believe that Komarpanths were robbers and cruel people.

I reckon Komarpanths, having the inbred soldier spirit or the fighting spirit in them, never agreed to or subjugated themselves to the Foreign Rulers - the British, and hence the British did not have a good opinion about us.

Komarpanth Veera Henje Naik born in the year 1736 is a apt example of not only brave soldier but a Patriotic Freedom fighter, who fought against the Britishers and the Sulthans of Mysore. The Britishers later killed him in the year 1801.

And also See this :-
http://hindu-kshatriya-komarpanth.blogspot.com/2007/04/history-of-komarpanths.html
Posted by yogesa at 7:21 AM 2 comments:

A Matrimonial Community for Komarpanths.....

Mahesh Nayak of Pune/Aversa, Ankola, has started a Matrimonial Community for Kshatriya Komarpanths on ORKUT http://www.orkut.com/Community.aspx?cmm=40066072 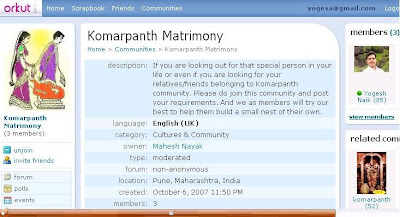 Posted by yogesa at 7:03 AM No comments: