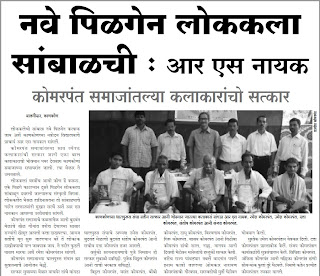 Panaji, Feb 21- Under section 9 (1) of the National Commission for Backward Classes Act (Act No. 27 of 1993), the National Commission for Backward Classes (NCBC) with examine requests for inclusion of any class of citizens as a backward class in the Central List of Backward Classes and hear Complaints of over-inclusion or under inclusion f any backward class in such lists and tender such advice to the Central Government as it deems appropriate, and under Section 9 (2) of the Act such advice of the Commission shall ordinarily be binding upon the Central Government.
The Commission  consisting of Justice MN Rao, Chairperson,  S.K. Khanventhan  member, Deepak Katole, member and Smt. Chitra Chopra, Member-Secretary will hold a Public Hearing on 24th February, 2011 at 10.00 A.M. at Seminar Hall, Secretariat, Porvorim, Goa regarding the request received by this Commission from the State Government of Goa/representatives, listed below for their inclusion in the Central List of Other Backward Classes for the State of Goa.
Castes /Communities in respect of which Public Hearing is to be helds Teli (including Christian Teli), Shimpi (including Christian Shimpi), Christian Renders, Komarpant, Thakar, Satarkar, Chari/Mesta, Nadaf, Pinjar, Mansoori and Quraishi, Kasab, Kasai.
The association (s) organization (s) and/or individual (s) of the above castes/sub-castes/ communities are requested to appear before the Bench of the Commission as per the above programme and furnish all available information/data regarding the above castes/sub-castes/communities. Any other association (s) organization (s) and/or individual (s) who have any view to express in the matter of the aforesaid  castes/communities also be present.
Source - http://www.digitalgoa.com/ca_disp.php?id=1821
Posted by yogesa at 9:20 PM No comments: