Dr. Neelam Komarpant is Treasurer for The Green Cross. A Marine biologist by profession, studying wildlife had always been an obsession for her since childhood. This lured her to study more about lesser known fauna like butterflies (Lepidopteron diversity), spiders (Arachnofanaldiversity), scorpions, lizards and other animals in the protected areas of Goa. She is an expert snake handler and often attends rescue calls in her locality. Her other areas of expertise are nesting ecology of birds, eco-theology, mangrove ecology and environmental education. She is often invited to conduct awareness talks on biodiversity conservation in schools and colleges of Goa. Since 2004, she is also an honourary Animal Welfare Officer nominated by Animal Welfare Board of India, Ministry of Environment & Forests, Govt. of India.

During the Week preceding the Holi Festival, the Komarpants of Aversa, Belekeri, Hattikeri, Bhavikeri, etc villages, take part in this Community Ritual of "Suggi". Suggi means "Harvest Festival". It is meant for appeasing the Gods for a better Crop on the next year, and also to show their gratitude for the Harvest that they have got in the present year. 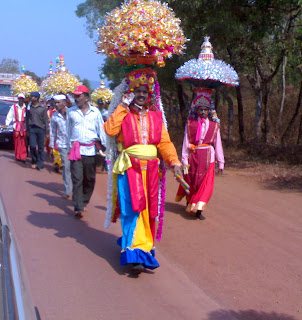 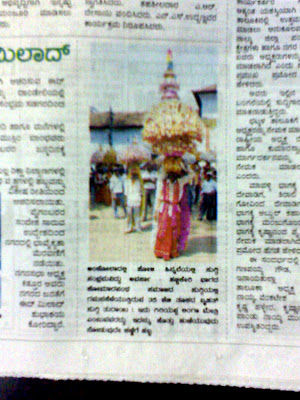 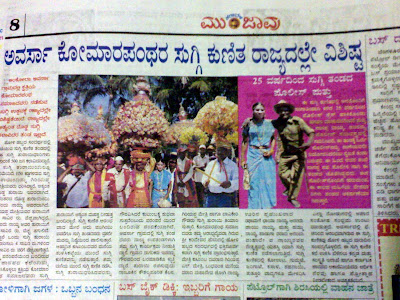 Each Komarpant family spends money like Rs.2000-00 to Rs.6000-00 for each “Turaai” - decorative head-gear, depending on their spending capacity. This head-gear decoration is made by some Vokkaliga persons of their village, and is worn on an auspicious day before the of the family deity/God. 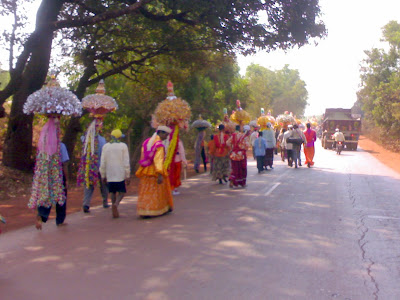 One male member from each family of the Komarpants from this region has to participate in the Suggi Ritual. And each family whole-heartedly does participate. 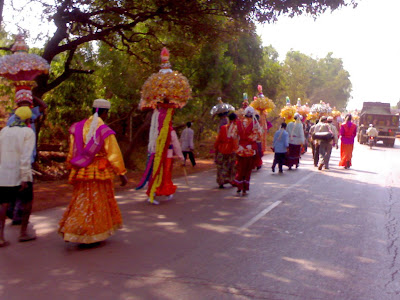 After wearing this headgear- Turaai, each person with one assistant/stand-by male member of the family, walk to all villages around Ankola taluk and perform the Ritualistic Suggi Dance before each Temple/God of that village and in the courtyard of the villagers. For the entire period, they stay away from their respective houses, cooking their own food outside and strictly adhering to traditional codes of conduct. 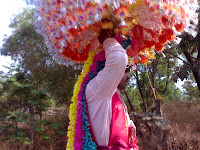 Only after the Suggi period of one week or so, the men remove the Turaai before their , and return to their homes, on the next day of the Holi Festival. This is a unique tradition even now being followed by the Komarpants of Aversa/Ankola taluk. 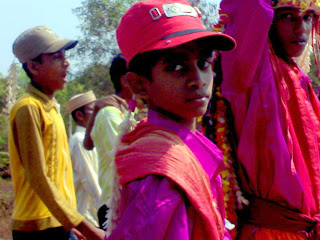 It is believed that Honouring the Suggi Dancers is equivalent to honoring the Gods, for better Harvest and for keeping deadly diseases/epidemics at bay. 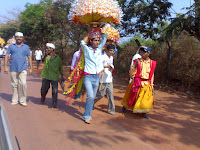 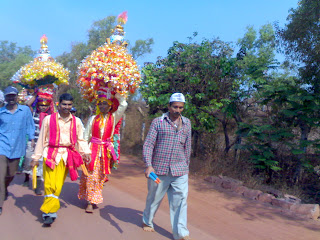 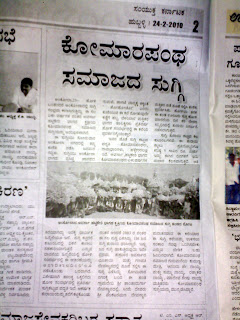 This tradition had recieved wide publicity in the local Newspapers, this year, as compared to the preceding years. It is the Duty of the each member of the Komarpant Community to encourage and preserve such Unique Traditions, that keep the community United as a Whole. 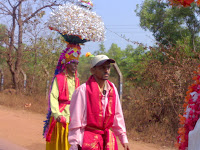 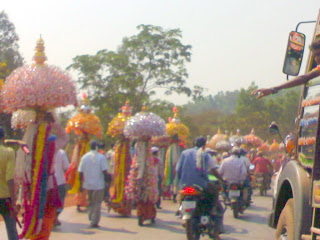 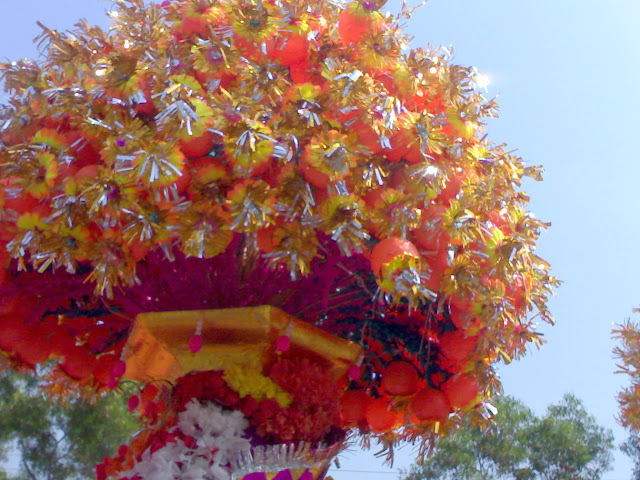 The term Komarpant is derived from the word kuwari (maiden girl) and the people of the community claim that they are the descendants of Kama ... Gardening was the traditional occupation of the Komarpants. There is a myth that long ago, ..


India's communities
Kumar Suresh Singh, Anthropological Survey of ... - 1998 - 2510 pages
The term Komarpant is derived from the word kuwari, meaning maiden. They claim to be the descendants of Karna, the son of Kunti, a Kumari Mata (unmarried mother) of the Mahabharata. Konkani is their mother tongue and they all are ..

Posted by yogesa at 9:44 AM No comments:

Email ThisBlogThis!Share to TwitterShare to FacebookShare to Pinterest
Labels: Google Books, Komarpant, Komarpants on the WWWeb

The much talked about inquiry instituted by the government into the assault of photo-journalist by police during Margao riots has failed to identify the culprit. Instead the inquiry report has suggested special jackets be given to photo journalists while covering incidents of Violence.


Chief Minister Digambar Kamat had ordered inquiry following complaint that the Photo-journalist Soiru Komarpant was assaulted by police while he was discharging his duty at one violent incident in Margao 2 years back .
Then additional collector Swapnil Naik was entrusted with a job to carry out the inquiry. Two and half months back Naik submitted his detail report to the Home ministry. Reporters should be provided with proper identity cards and the identity should be displayed along with Jackets. Secondly those journalists who are covering violent incidences or beats which involve risks should be covered under Health Insurance so that immediate medical help can be made available, the report has suggested in general.

As far as case of Komarpant is concerned, he should be given compensation by government, the report has concluded.
Report has not put onus on anybody about the alleged assault.

In a Report published today to mark World Press Freedom day, Reporters Without Borders names 40 such devils around the world that it calls predators of press freedom.
The devils are the “politicians, government officials, religious leaders, militias and criminal organizations that cannot stand the press, treat it as an enemy and directly attack journalists,” report says.
In India, the devil is mostly kept at bay because journalists here “take pride in their freedom and will defend it robustly in street protests or before the court,”  a separate report maintained online by the world media watchdog says on India.
But the report on India also notes that the safety of journalists is precarious in some Indian states like the Naxalite-affected Chhattisgarh where “local reporters are regularly accused by police of being ‘Maoists’ and by insurgents of being ‘traitors’.”

"In Goa, indeed there are cases that concern us. Soiru Komarpant, a photojournalist working with Gomantak newspaper was assaulted a year back. The inquiry is conducted but report is not open," Kamat remembered talking about hazards faced by media in Goa.
"We want the report to come out which will also expect to suggest certain guidelines for the photojournalists when they are on duty," the GUJ said.
Komarpant was brutally assaulted by police in Margao city last year when he was covering a flash communal violence that erupted in this commercial town. Chief minister Digamber kamat had constituted inquiry by senior bureaucrat Swapnil Naik to investigate into the assault. "The report is placed before chief minister's office months back but still its not revealed despite our several representation to chief minister," Kamat said.
Subsequently, Goa had witnessed two more assaults including vernacular journalists in south Goa. "In one of the case, a minister had threatened a journalist butnothing has happened to get him justice," Kamat said. "These are stray incidents which threatens freedom of press in Goa," GUJ president said. Goa Union of Journalist president Prakash Kamat, during the function, urged state acting chief secretary Narendra Kumar to commit on making this inquiry report public on international press freedom day.
Sources - http://www.dnaindia.com/india/report_goa-govt-refuses-to-make-journalist-assault-report-public_1378406
http://www.dnaindia.com/india/report_public-pressure-may-force-curbs-on-paid-news-trend_1378416
Posted by yogesa at 7:52 AM No comments: