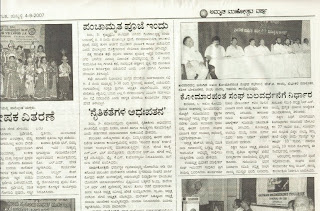 This is another Scanned image of the Newspaper Report of the 24th General Body Meeting of the Akhila Kshatriya Komarpanth Samaj (R), Karwar, that appeared in the Kannada daily "Samyuktha Karnataka" published from Hubli, dated 04-09-2007, with the caption - Komarpanth Community decides to Unite.
An important suggestion was made by Sri. A. R. Naik of Kumta, in the context of Karwar-Ankola being made a single Parliamentary Constituency. This is going to benefit the Komarpanths, spread in Karwar and Ankola taluks, as our population becomes consolidated, which can be politically leveraged to the benefit of the Komarpanths. He suggested that we should form a Consensus Candidate, by putting the names of all the aspiring candidates together to draw lots, and presenting it before our Shringeri Guru, to draw out the name of a candidate, who should be accepted as our Consensus Candidate for the entire Komarpanth Community Voters in Karwar and Ankola taluks. Thereby we will be able to unite and strengthen ourselves, and establish ourselves as strong contenders in the political arena.

This suggestion was widely commended in the meeting, and all members unanimously agreed to work on the suggestion.

This is overwhelming news. Thanks for the news. I now remember the old saying United we stand